skip to main | skip to sidebar

Out with the new and in with the old!

Hey All,
For all of you that don't really like the new selection floater in 3ds MAX 2008 there is a way to get back to what you know and love...but its even better. The new dialogue to select stuff in MAX 2008 is just too radically different from the way that it was...period. So...people like me who, like and are familiar with, the old way, feel a small sense of adversity when that dialogue box pops up. Its kind of like when someone says...."ohhhh try this you'll love it", then you do everything in your power not to wretch and have a childish outburst at how extremely wrong it was to even try it. Okay thats a little harsh but seriously, its all about work flow. Try...and learn the new way...but as a keep sake or in a pinch use this method to get back what you know and love.
With 3ds MAX 2008 open, go up to the top of the screen to the customize drop down and select Customize User Interface. Then scroll down and find Selection Floater from the list of tools. You can create a new toolbar called "Legacy Tools" or something like that....then just drag it over into the new toolbar. 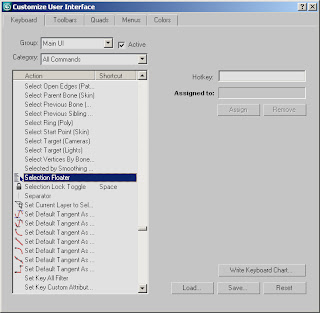 Now you can customize the button to whatever you want....but the best thing about this is that now.....wait for it....now....when you click this button, not only does it open the selection floater that you know and love...IT'S MODELESS!!!! What does that mean? Well...it means that you can have your favourite selection floater open and still work in MAX with the selection floater open! I love it....I run dual monitors so i have it over on my second one all the time. This may not be a big deal to some...but i love it! Hope it helps!
Posted by Dwayne D. Ellis at 11:04 PM 1 comment:

Okay, first off, i had only intended on giving this stuff to those that attended my class AutoDesk University 2007 in Las Vegas...especially the ones who were hung over from the 80's bash and stayed anyway. I've uploaded some stuff to my site for you guys to download and have fun with. Here are some renders from the scene:

The scene is rendered using VRay by ChaosGroup . I will have this in the free section of my, hopefully...soon to be completed website...in the downloads section. I'll update you guys with the links when verything is up and running.

Well....took my first spin with 3ds MAX 2008 and mental ray 3.6 today....i will say that its encouraging. The quality has always been there but now the ease of use is really, really on par with some of the other rendering engines out there. The cool thing is that the UI actuallly looks like it could be VRays more complicated and less understood little twin brother. As i said...i'll be posting more as i get some test results from it. For now though, i have to hit the manuals and read up on what the best ways to control this beast. Its fun though....time is a thief though.

Now this next little bit is a really big deal and i hope someone out there can tell me how to fix this. So, i've actually made the jump from MAX 9 to 2008, i'm not going to do a review...theres a million out there. What i do want to talk about is a really small thing that makes a huge difference to me....and i hope it isn't one of those things that they just change or take out without telling anyone. Heres the deal...in MAX 9, and for every other version that i can remember going back to 1.0 you could select an object, then hold the shift key down and click the transform gizmo...not move rotate or scale...but just click it, and this would allow you to make a copy/instance/reference. Not in 2008....so please if anyone knows how to fix this if its possible...send me message! Later!

Upgrades, VRay and something good to work to!

The last week or so has been crazy, so i couldn't post as diligently as i had initially planned. Having said that, though, i am now in between projects which means that i can finally install MAX 2008 and get the farm up and running...as well as give the new mental ray features a whirl. I will be posting the resulting renders of my mental ray tests as well as some of the scenes. I've been flooded with emails since returning from Autodesk University so if i haven't got to yours, i promise that i will....oh...and if anyone can put more hours in a day i would appreciate it!
So, as some of you may have noticed, i am currently in the construction phase of my personal website.

I'm sort of getting everything together right now as far as the content that i'll be putting up. The layout is finished so hopefully in the next little while all the free stuff/commercial stuff will be available for everyone. The content will be heavily swayed toward rendering...with particular regard to VRay and mental ray techniques. So please stay tuned...bookmark it...check back often...i'd really appreciate it. Oh and if there is anything that you want to see in particular shoot me an email.

I was told by a friend that i should check out this cd...he thought that i would like it. So i bought it and i have to say that after i listened to it...i bought all the rest of his cd's. So if anyone wants something really great to listen to while your working, check out "Continuum" by John Mayer. Its all i've been listening to the last couple of days...
Posted by Dwayne D. Ellis at 11:01 PM No comments:

Two shouts, a Greek and Entanglement.

Hey all! First i want to recognize a few people who were kind enough to recognize me. Daniel Hurtubise, http://revitit.blogspot.com , my Revit Architecture go to guy and good friend/fellow Canadian. I follow his blog as best i can, since it is in French, and i am, after all, a lazy boy from Ontario. I promise i'll work on my french...and spanish...and german... etc. The next guy is David Harrington. David doubles as my editor at AUGIWorld magazine and also one of the many who shoot me emails with interesting 3ds MAX problems. Keeps me on my toes. You guys can check out his blog over at http://caddhelp.blogspot.com/ .
I love to read...and when i'm not reading i listen to audio books. In my car, at work, at home..whenever i can. So i picked up this random book...which i do from time to time. The title of it is "The Story of Philosophy by Will Durant". I'm only about a quarter of the way through it but it's really interesting. Its sort of a capture of the lives and times of some the greatest thinkers in human history. It's really interesting to read about Aristotle, the man. What he was like, what he did in his life...aside from the obvious. I like it so far so if anyone is interested in this type of stuff check it out....i'll probably give a few more comments about it when i finish it.
This brings me to the last sub topic. As i mentioned i love to read and listen to audiobooks. Well i just finished listening to a great one. Well i think its great anyway. Its a book about quantum entanglement but it goes through and gives a whos who and whats what of the development of quantum mechanics. The book is titled "Entanglement by Amir Aczel". Taken from the Penguin website:

Entanglement tells the astounding story of the scientists who set out to
complete Einstein's work. With accesible language and a highly entertaining
tone, Amir Aczel shows us a world where the improbable—from unbreakable codes to teleportation—becomes possible.

Now this might not be everyones cup of tea, but i love anything and everything related to this type of stuff. So having said all that, i am going to try and get some 3d related stuff up here in the next couple of posts. Stay tuned!

The first of many!

I've been avoiding this...somewhat...for a while now. Starting a blog i mean. The reason being that i tend to be overly wordy and somewhat opinionated. So i figured that if i at least try and throw in some helpful stuff every time i post...i should be okay. So my helpful bit for today is that i am going to keep this short and sweet...as it is late...and tomorrow is a new day after all!
Posted by Dwayne D. Ellis at 11:42 PM No comments: